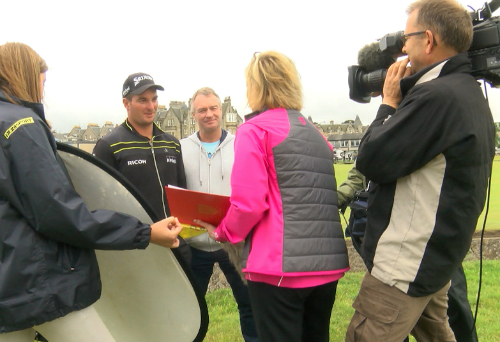 #FoxTracker At The Home Of Golf

Sports Inc took New Zealand sports fans behind-the-scenes with Ryan Fox as he made a dream debut at The Open Championship at St Andrews.

A joint-venture between Sports Inc, TVNZ and New Zealand Golf, saw a crew track Fox around the Home Of Golf as he appeared in his very first Major championship.

Daily VNR packages were distributed to ONE News featuring interviews with Ryan, his father Grant, his coaching team and the likes of Steve Williams and Sir Bob Charles.

ONE News then incorporated the content into their nightly sports bulletin, keeping New Zealand sports fans updated on Ryan's every swing.

The exclusive footage was also edited into a special feature of Ryan's dream week that screened on Holden Golf World on SKY Sport New Zealand and TV3.